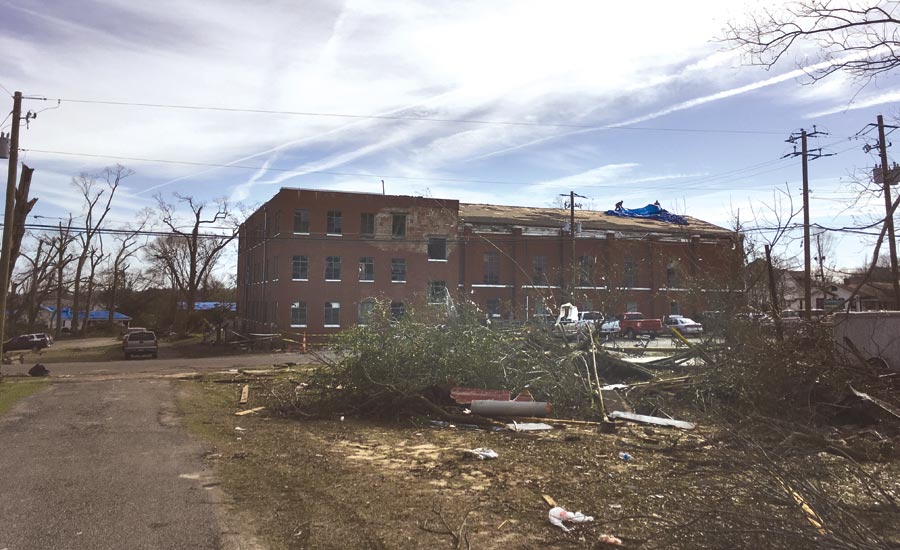 The United States gets more tornadoes than any other place on earth, by far. The National Centers for Environmental Information says the U.S. sees about 1,250 tornadoes per year; Canada is a close second with about 100 per year. Talk about a big difference. Tornado alley, which cuts straight through the plains states from North Dakota to Texas, is the region most prone to the severe storms that spawn tornadoes.

Early in the morning on Saturday, Jan. 21, as most people were asleep in their beds, a deadly tornado ripped through part of Hattiesburg, Miss. By the time the severe storm system passed, four people were dead. And more than 500 homes in two counties severely damaged or destroyed. Another roughly 600 homes had minor damage, according to the local newspaper, the Hattiesburg American.

The rebuild process started with just one phone call to Kim Brooks, president of ServiceMaster DSI in Kansas City, saying Hattiesburg needed help, and now. Within 45 minutes of that initial phone call, Brooks had the first CAT loss team mobilized and on their way. The closest CAT team to the disaster site at the time was in Memphis. And they arrived in Hattiesburg by mid-afternoon on Saturday to start reporting back what they were seeing on the ground.

“They confirmed this is a big event, and listed out everything crews will need,” Brooks recalled. “We deployed a number of trailers with enough equipment to run 300 to 500 people for a week without needing to be resupplied. Two more of these trailers were sent in later. And the mobile command center was also put out on the road.”

This CAT team focused specifically on the William Carey College campus, which took a direct hit from the tornado. Multiple buildings were impacted, and there was a lot of work to be done. The recovery and restoration process started by getting water out of the buildings and beginning the stabilization process. Equipped with IR cameras, teams quickly assessed the extent of the water damage in the interior and exterior of the buildings. They also used a drone to get a better visual of the damage from above and figure out which buildings had roof damage that needed to be covered.

As this process was underway, the command center in Kansas City was also fielding phone calls for any additional needs. Anything from labor to electrical requirements like light towers and generators. That command center focused on getting the needed supplies to the area so everyone at the university could focus on cleanup efforts.

“We had meetings twice a day with the university – in the morning at 8 a.m. and in the evening at 5 p.m.  Then, we sent them progress management reports every night,” Brooks said while explaining the importance of communication throughout CAT work. “We assigned a project manager to each building, and there was a reporting structure from there. If there were multiple floors in a building, there were people in charge of each floor, reporting back to the project manager. Kind of like the military.”

When Brooks spoke with R&R about this project about three weeks after the tornado hit, they still had as many as 300 people working 24-hour shifts in more than three dozen buildings on campus. Thanks to the central command center on-site, project managers were able to simply radio the command center. If they needed something at a specific building, and the supplies would be brought right to them – eliminating the need for crews to ever leave their specific worksite.

Brooks said many of the workers were local, but the project managers and most techs were not. ServiceMaster Restore had blocks of hotel rooms reserved for crews. And had a tent set up to feed crews so they never had to leave the campus. It was key that no time was wasted.

“The university identified priority buildings, so those done first,” Brooks said. “Then, the general contractor was right behind us to do their work. It’s like a conductor conducting a symphony with a lot of different moving pieces.”

That conducting included details all the way down to directing and rerouting traffic on campus because, in the early days, everything was very hectic. So, they created a strategic way to get from point A to point B in safe and efficient ways; and six to seven people given this specific task of directing traffic. Brooks admits this isn’t something you do on every job. But the job of a restorer at the most basic level is to solve problems, and this was one of them.

Just one mile from the William Carey campus, Darrin Renz was mobilizing his team from ServiceMaster Hattiesburg. To restore a large Salvation Army complex.

Renz and his wife, former school teachers, have been in the restoration business now for two decades. And have 14 employees covering a 14-county area. The morning the tornado hit, the couple awoken by their dogs around 2:15 a.m.., And soon the weather alerts on their phones going off.

“About 4:40 a.m., my operations manager was texting all the crew to make sure everyone was safe. Then also to let everyone know we were hitting the ground running,” Renz said. “We were in Hattiesburg by 7 a.m. and I could tell the damage was going to be larger than we could handle. By then, DSI [Kim Brooks] was calling us and asking what was going on.”

SM Hattiesburg took on six commercial projects in all, and one smaller home with a little water damage. The main project was the Salvation Army campus which had four buildings including a Boys & Girls Club, gym, administrative building, full sanctuary, and a housing building. Renz and his team worked quickly to remove contents from the buildings. He estimated it will be six to nine months before the Salvation Army can move back into their buildings. Because of the extensive damage done by the tornado.

While they didn’t directly overlap on projects, Renz said it was a relief knowing. When something is too big for you to handle alone, you have a whole network that can help.

“ServiceMaster had an army of people to take care of an Army of people so they can do what they need to do,” Renz said. “We’re family we know each other. You not only pick up the phone and start calling people yourself, but you also have people calling and saying ‘I am on my way!”

Today, about five months after the deadly tornado. The Insurance Journal says insurers have paid out more than $31.6 million on 2,801 claims from tornados that hit Mississippi in January.

Recovery and restoration efforts continue today, with hopes that soon, Hattiesburg will be back to its old self.

Resources for Safety in Lead Abatement