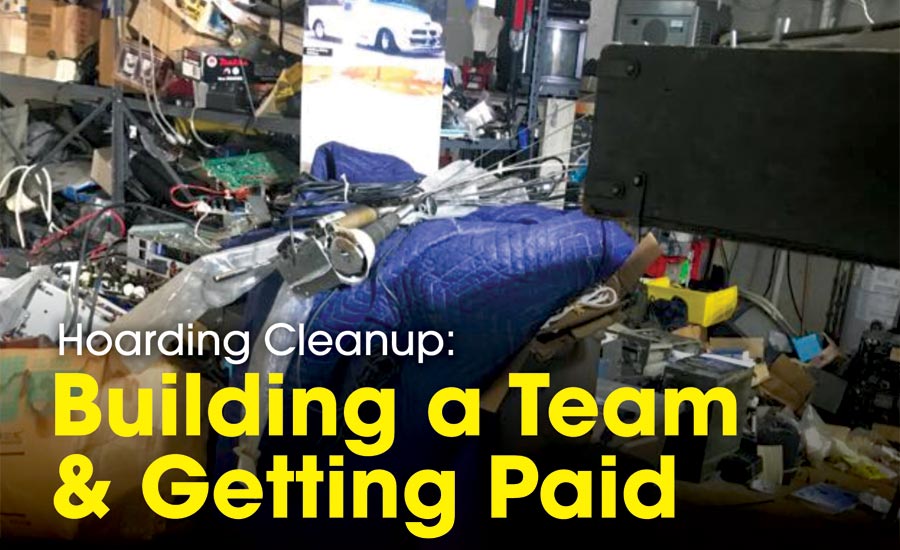 Restoration, in general, is not for the faint of heart. You can probably think of dozens of situations you’ve been in that would make the “average” person squirm. Snakes in a crawl space? Monster spiders in an attic? Sewage up to your shins? Hoards of trash and biohazardous waste? That list just scratches the surface.

Rainbow International of Abington-Warrington in the suburbs of Philadelphia handles dozens of hoarding jobs a year. The owner, Rich Roberts, has built a team within his company that especially well-suited to handle the often stressful work hoarding cleanup entails. A volunteer firefighter himself, Roberts has surrounded himself by fellow first responders. With that type of resume as a company, his team gets a whole lot of referrals for hoarding cleanup jobs.

Like many hoards, a multitude of jobs Roberts’ team handles discovered when there’s been another loss in the home – like a fire or flood. Roberts said adjusters call him directly when they discover an especially bad hoard because they trust Roberts and his team to do the job right, and not take advantage of the client. His team understands the mental illness aspect of hoarding and the importance of full trust from the hoarder.

“It’s the relationships you build, ultimately, that bring in the work,” Roberts admitted. His company even gets referrals from hoarders they’ve helped, to help a friend who also has a hoarding problem.  Relationships are the name of the game.

“I’ve been an EMT for 18 years, and just like any other disease, hoarding is a disease,” Roberts explained. “All you can do is sit down with them and figure out how to work through it.”

Sometimes, that means sitting with a homeowner and listening. Roberts recalled a recent job at an elderly woman’s home. It took two and a half weeks to remove all the contents from her water-damaged, moldy basement. There was a lot of crying, sitting with her, and trying to help her emotionally. Nothing in the basement was hers; it was all heirlooms of family members who now gone. The homeowner was clearly, in Roberts’ eyes, a second-generation hoarder. The Rainbow team filled at least one 14-foot truck each day with stuff from the basement, which had all been inventoried and boxed up. In the end, the homeowner bought some shelves, and the salvageable items returned to the home in the boxes.

In other instances, a hoard might be hidden from plain view or an initial walkthrough. If you’ve ever seen that episode of “Friends” that’s about Monica’s closet, you would understand. That was Robert’s experience on a recent fire loss, where the husband didn’t want to let Roberts into the basement to see the breaker box. After some conversation and coaxing, Roberts led into a basement filled to the breaking point with electronics and other items – and 2.5 feet of standing water. The husband had not told anyone that after three days of torrential rain and no power, the basement had flooded because the sump pump was off.

“Seventeen days and more than 500 boxes later, the basement cleaned out,” Roberts said. By the numbers, this job took three men working eight-hour days for 17 days. They loaded multiple large trailers and trucks full of items, enough to fill 14 massive wooden storage pods in Roberts’ warehouse – filling 3,500 square feet of space. They also filled half of the family’s two-car garage with electronics that got wet.

GETTING A HOARDING CLEANUP JOB COVERED

Hoarding claims are often denied from a lack of routine maintenance on the property. However, Roberts has learned adjusters will typically pay to have him find the source of the loss, and from there the claim will often covered due to the nature of the loss.

“At the end of the day, we want to find coverage for them to help everyone involved,” Roberts explained. He also uses the time he’s at the home doing his inspection to build rapport with the hoarder, and earn their trust. From the very moment he enters the home, he treats their home and items inside like fine china. He also takes the time to ask questions, but more importantly… to listen.

“You have to learn to work with them to find a plan, get their trust, and figure out what they need,” he said. “You have to talk to them; Have to hold their hand.”

In the end, Roberts is able to get adjusters to cover about 75 percent of the claims. Once they know the claim will covered, Roberts and his crews suit up (safety first, right?!) and empty the affected spaces, do the necessary mitigation, and put the house back together again.

Case of the 1,000-Pound Stack of Smoke-Filled Clothes