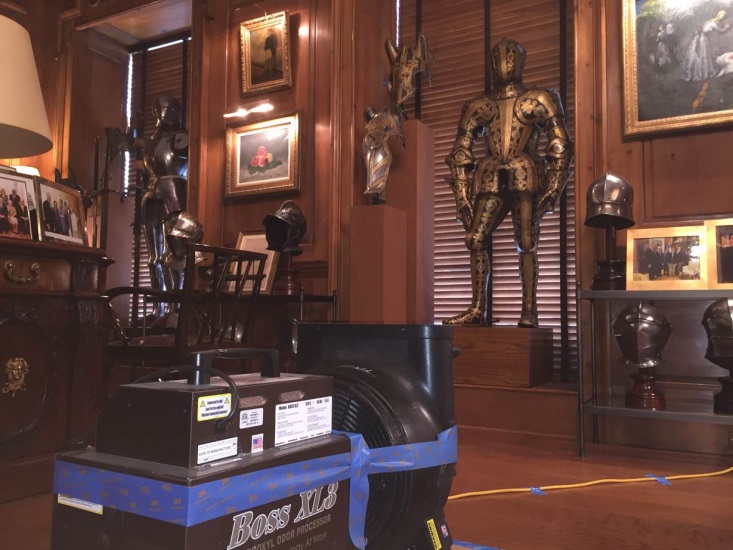 Hydroxyl generators were introduced to the disaster restoration industry in 2008 as a new and disruptive technology, and have stimulated many questions and discussions throughout the years. While contractors will quickly confirm how effective they are, there are still a variety of questions.

This article will address some of these questions and dispel some of the myths that exist.

Myth #1: All hydroxyl generators require 60% humidity to be effective.

To start, there is a statement in the industry that all hydroxyl generators require 60% humidity to be effective. This is a myth and would render hydroxyl generators useless in many parts of the United States. Hydroxyl generators using the patented technology will be effective with humidity as low as 5%. Contractors should never have to add humidity for their hydroxyl generators to work, particularly since this is counterproductive to most projects they are on. It is true that humidity plays a part in the chemical reactions that occur to create hydroxyl radicals (and oxy and peroxy radicals). However, any change in humidity will not have a noticeable effect on the generator’s ability to eliminate odors and certainly won’t determine if the machines work or not.

Myth #2: You need a strong fan to blow the hydroxyl radicals as far as possible before they’re gone since their half-life is a fraction of a second.

This is false, and would never work if this strategy had to be used on projects.  Instead, the patented technology is able to continuously create new hydroxyl radicals outside the chamber of the machine.  The science behind how this works is quite complex, but chemists refer to this as a chain reaction or a cascade effect. This means new hydroxyl radicals, as well as oxy and peroxy radicals, are being created outside the machine and throughout the treatment space due to a multitude of chemical reactions.

The ability to create this chain reaction is a critical element of the patented technology and allows contractors to eliminate odors that have been adsorbed in both the contents and structure. Additional air movers are often helpful to distribute hydroxyls into hard to reach areas. Many contractors have been very creative in reaching difficult areas, but those detailed tips are best in a different article.

Myth #3: There isn’t any documented, real-world research I can use to prove to a homeowner or adjuster that hydroxyl generators actually work and are safe.

That’s false; there is significant documentation out there and this is easily accessible! Testing has been performed over the years by reputable third-party companies like Underwriters Laboratory (UL), Lovelace Respiratory Research Institute, the FDA, Comparative Biosciences, and Wonder Makers Environmental. Results provide information that shows how many hydroxyls are produced and how much ozone is produced. A full 13-week toxicity study on rats following FDA GLP guidelines was conducted and shows no adverse effects.

One of the more recent studies led by Michael Pinto with Wonder Makers Environmental involved air sampling every two hours following a fire set in a test lab. In this test, source materials were not removed, yet simply running the hydroxyl generator showed a dramatic reduction in VOCs and elimination of odor.

Finally, the FDA recently approved the patented technology as a Class II medical device for use in occupied areas.

These studies were only performed on the patented technology, and are powerful tools to confirm both the safety and efficacy.  They will certainly help answer the questions that may be received from both customers and adjusters.

Myth #4: While there are now different brands of hydroxyl generators, they are basically the same.

This is also false. There are two types of hydroxyl generators in the disaster restoration industry, and they use very different processes to create hydroxyls; as a result, the strength and capabilities are very different.

One uses high-powered UV light with multiple wavelengths to generate hydroxyls that exit the machine. And create a chain reaction throughout the treatment space. This technology is unique because it enables the treatment of not just the air, but more importantly, the contents and structure where the odors have been adsorbed. Considerable resources have been devoted to important third-party studies on this particular technology, and these are the only hydroxyl generators with specific Xactimate pricing (CLNDODHY> and CLNDODHY). They are very powerful and it is important to follow the manufacturer’s operating instructions restricting usage in small, occupied areas. These generators are used in conjunction with an air mover.

The other process used to produce hydroxyls is called photocatalytic oxidation (PCO), which is primarily used for residential air purifiers and many different brands can be found online. The PCO process uses a titanium dioxide-coated surface and low-powered UV light. Whereby only the VOCs in the air that passes through the machine and come in contact with this coated surface can be treated. This PCO process does not produce hydroxyls that exit the machine. And therefore cannot eliminate the odors that have been adsorbed by the contents and structure.  As you can see, while the name hydroxyl generators are the same, the differences are significant.

People often ask how long the UV optics last. It is true the answer could be 8,000 hours or more. However, this is very misleading. UV light gradually loses power over time. The patented technology is based largely on the power of these optics. Yes, the optics will stay lit for 8,000 hours or more, but the machines become weaker and weaker the longer they run. Jobs that used to take three days to complete may now take four or more. In this industry, when dealing with moderate to severe odors, it is recommended that optics be replaced after the hour meter shows 4,000 hours of usage.

Truth #2: Coverage area varies on a job-to-job basis depending on a number of factors.

What size area will one machine cover? Since every odor project is unique, there are always variables to consider such as the layout of the structure. The number of contents on-site, the severity of the odor, and how quickly the odor should be eliminated.

After nine years of experience with hydroxyl applications in this industry, and factoring in the many variables a contractor may encounter. The general rule of thumb is that one machine will cover 1,000 – 1,500 square feet with ceiling height up to about twenty feet or so. For areas with thirty-foot ceilings or more, we lean more towards the 1,000 square foot coverage area. Some have indicated a machine will treat “up to” 40,000 cubic feet or more. Could it? Perhaps, but treatment would take a long time, the machine would have to be moved around, and this would be a very poor guideline.

Truth #3: Ozone is generally faster, but unlike ozone, crews can keep working while hydroxyl generators run eliminating interruption and downtime.

Lastly, contractors usually want to know how long it takes hydroxyls to work compared to ozone. Scientifically, hydroxyls are one million times more reactive than ozone. This means that they will disassemble a much larger range of odors and VOCs. However, the time it takes to do this is determined by the concentration of oxidants used. The average ozone generator compared to the average hydroxyl generator will be faster. For example, if it took the ozone generator 24 hours to work, the hydroxyl generator will take 36.

That being said, you can let adjusters know that the hydroxyl generator will be running while the physical work is being done, not after the cleaning is all done. So the job is now streamlined and the odor will be gone sooner. This can now decrease or eliminate the need for ALE or business interruption. It is also important to remind them that, unlike ozone, hydroxyls will not damage sensitive materials and can be run while the treatment space is still drying.

This should address the more frequent questions. We’re always available to answer more questions and provide training classes to dive into more detail. Feel free to contact us any time!