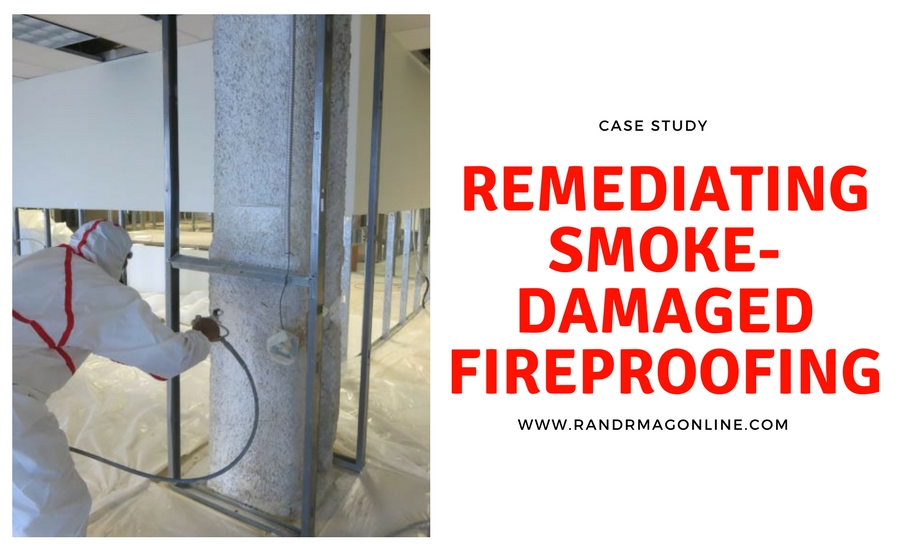 This is a case study about a solution for fire damage that hasn’t existed until very recently. This is an example of real innovation benefiting owners, occupants, and where an experienced restoration contractor learned a new methodology and new profits. This is about how choosing a smoke sealer made budget and time savings of 75% possible.

It starts in Los Angeles with a fire historic in scale, and worthy of a tinsel town catastrophe script. Dateline: 1:30AM, December 8, 2014. The 1.3M square foot DaVinci apartments, a very controversial downtown construction project catches fire. Crammed astride the 110 and 101 freeways, the fire rages as responders struggle just to get on site. The conflagration would entirely destroy the mostly wooden structure, illuminate the iconic LA skyline, and generate heat so intense that street signs melted. The destruction was total, and while there was nothing left of the DaVinci to restore, this restoration story describes a leading-edge response to the pyroclastic smoke and heat that detonated windows and facades all across adjacent Figueroa Plaza.

Specifically, this is about restoration of smoke damage at 221 North Figueroa: a 16-floor Los Angeles commercial/office property, built in 1990, and containing 330,000 square feet. Occupants included municipal agencies and a 500-strong private law firm. The side of 221 directly facing the DaVinci absorbed an intense heat that blew out most windows. Plumes of smoke rushed into the building, fires ignited on three floors, and water damage added complexity where sprinklers activated on six floors.

For the next 90 days, while the demolition and other preliminary restoration proceeded, the consulting engineers researched solutions for the fireproofing. Sprayed Fire Resistive Material (SFRM), aka spray-applied fireproofing, was installed everywhere on the steel pillars, beams and deck assemblies. Without some action, smoked fireproofing could relentlessly release odors into the plenums, perhaps indefinitely.

REMEDIATING FIREPROOFING AFTER THE FIRE

The 221 example is dramatic in origin, but not atypical in aftermath. With the volume and intensity of the smoke driven into the building, it was a reasonable assumption that odor emitting particulates had saturated the inherently porous fireproofing. While this smoke was driven sideways, fireproofing is often overhead, and since that is where heat and smoke so often travel in volume, fireproofing as a reservoir for smoke odor isn’t unusual. But good solutions have been…

The fundamental principle of fire damage restoration is source removal of contamination wherever possible. This overarching principle has long been standard across the restoration disciplines. Contaminant removal will be the central directive of the new fire damage restoration standard anticipated for release in 2019 (See, Coming Soon: A Fire Damage Restoration Standard, R&R April 2018). But there are times when source removal by cleaning isn’t sufficiently practical or effective. Smoke-saturated fireproofing too often represents one of those situations. Dry-cleaning methods, such as vacuuming, can be partially effective. But the nooks and crannies of spray applied fireproofing lend well to harboring contaminants. Wet cleaning is discouraged by SFRM manufacturers for fear of altering the fireproofing’s thermal resistive properties. Any wetting thru to the substrate would require SFRM replacement because the bond strength would be probably compromised.

Solicitations for removal and replacement of the fireproofing were sought. But the bids received were daunting and disagreeable to all parties both in regards to dollars and time. Because building code requires fireproofing on the steel, everything removed would have to be replaced by respray with a comparable material. To do all the work, the tenants would have to be elsewhere for at least 6 months, and probably more realistically for a year. Breathtakingly, the price tag was upwards of $4 million. All parties decided sealers were now worth another look, and they reached out to the SFRM manufacturer for advice.

Among the suggestions was to contact Fiberlock. Recently, Fiberlock had brought a seven-year R&D project to successful completion with the introduction of the RECON Smoke Odor Sealer. RECON SOS represents real innovation as the first sealer that can hold back both stains and smoke odor as well or better than solvent-based products (including shellac), and unlike its solvent-borne predecessors, RECON SOS can breathe. Permeable to the movement of water vapor through the cured sealer, this was a major development because it avoids the creation of unintended vapor barriers, condensation, and resulting mold. But were these performance attributes transferrable to smoke-saturated fireproofing?

The genesis of innovation is a confluence of need, knowledge and inspiration. In this case, the knowledge portion came from Fiberlock’s unique expertise in encapsulation of fireproofing. Delivering a durable encapsulant thick enough to ensure a continuous film across the high and low points of an irregular surface isn’t as simple as setup and spray. For fireproofing, there is a time-tested, two-step technique: penetrating then bridging.

Fireproofing materials vary widely in density, and some kinds are so fibrous and light that they are nicknamed “cotton candy”. Application of a thick coating alone can prove too heavy. While the sealer adheres, the additional weight causes the fireproofing to come apart internally. The coated pieces can detach and fall, exposing a smoke odor source, and leaving behind a ragged, damaged remnant likely to shed fibers, silica and/or particulate into the air as well. The solution is dilution. A preliminary application of the sealer is mixed with water as necessary to encourage the diluted coating to soak into the fireproofing (a process termed capillary action). This is the penetrating application, and the soaking in step yields resin within the fireproofing that strengthens as it cures. The hardened resin enhances the dimensional stability of the outermost areas of the fireproofing enough that a second and final application of undiluted coating can be applied (the bridging application; see, Asbestos Encapsulation, R&R, August 2014).

The inspiration part was the informed realization that as far as a topical sealer is concerned, whether asbestos or not, fireproofing is essentially the same. Thus, the penetrating/bridging method from abatement can be translated into sealing fire damage. But, would two different coatings be needed – one for each step? Fortunately no, as the RECON SOS formulation is miscible. Defined, this chemistry term refers to liquids that when mixed form a homogenous combination. No other fire damage sealer available at the time offered this characteristic. For this application, being miscible is key because the RECON SOS and water blend will be consistent, stable, and thus predictable. Whether less water for less penetration, or more water when greater resin saturation is desired (something variable from site to site), the RECON SOS was capable of being a one product solution in two steps: both penetrating and bridging.

From this point forward, the methodology for the fireproofing – a water-based smoke seal solution was settled. The water-based smoke sealer provided the odor suppression performance of shellac without the downside issues of alcohol and solvents. The application methods of penetrating then bridging were practical, familiar to the fireproofing manufacturer, and had a long track record as a successful technique from use in abatement. The chosen sealer was compliant with the strict VOC requirements in southern California, and being non-combustible and low odor, occupants could be returned in phases to restored areas while in adjacent spaces the restoration work continued.

The engineers consulting on the restoration still had to integrate the fireproofing sealer protocol into the overall 221 Figueroa scope. For example, a limitation of any sealer is that it only blocks the transmission of odor from the side of the surface to which it is applied. Gaps that are too big for a coating to bridge are also hard to clean and can emit odor. Therefore, a careful survey and initiative had to be conducted to find and fill those areas with foam or caulk. Fiberlock’s odor counteractant was deployed as a cold-fog and direct spray treatment throughout the structure. The HVAC system was also contaminated, and cleaning was conducted as possible, but the ducts would still contain odorous residues. Under a supplementary scope, those systems would also be coated with the RECON (fortunately it also satisfied the code requirements for coatings in HVAC (see NADCA White Paper Chemical Product Application in HVAC systems, https://nadca.com/resources ). When odor returns after restoration, the culprit is virtually always a previously unnoticed, unaddressed and uncleaned accumulation of combustion byproducts such as soot or ash. In short, sealers are like any tool used in restoration: insufficient alone, and effective only when part of a holistic approach that encompasses all the contamination.

By February 2015, after intense competition, a restoration contractor was selected that would oversee the painting, and a local painting subcontractor would be spraying the smoke sealer onto the fireproofing. The engineers were able to develop and supplied a scope of work with technical assistance from Fiberlock, which also supplied factory-trained personnel for the final two stages prior to full scale application: Field Testing and Field Training. Testing at the site for any significant size project is always recommended because of the unique nature of every fire, plus the type of fireproofing, and multiple other variables. In-place field testing, with the actual cleaning technique, surface porosity and profile, is also then costs are finalized. Tests reveal the coverage rate per gallon, and in turn sharpens the numbers for estimating material and labor cost.

In addition to observing the pilot areas, Fiberlock provided applicator training on spray technique, coverage estimation and logistics for delivery of the 3,750 gallons of sealer eventually used.

By March 2015, spraying operations were fully underway. Eventually together with the HVAC, the sealer application phase would be done in just two months. That was a very positive reduction compared with six to 12 months for removal and respray replacement of the fireproofing. And occupants were gradually moved back in as areas were completed – something much more difficult when a shellac is used, and impossible on respray/replacement situations until the entirety of the new fireproofing is installed and inspected. The overall cost improvement was also impressive. A project priced upwards of $4 million for removal/respray, was accomplished by using the water-based sealer for $600,000.

Today, businesses are back operating in 221 North Figueroa. Departments like Building & Safety, and Recreation & Parks operate normally and don’t give a thought to the sealed fireproofing above their drop ceilings – exactly the kind of outcome that equals success in fire damage restoration.

What Do Adjusters Really Think of Contents Cleaning?