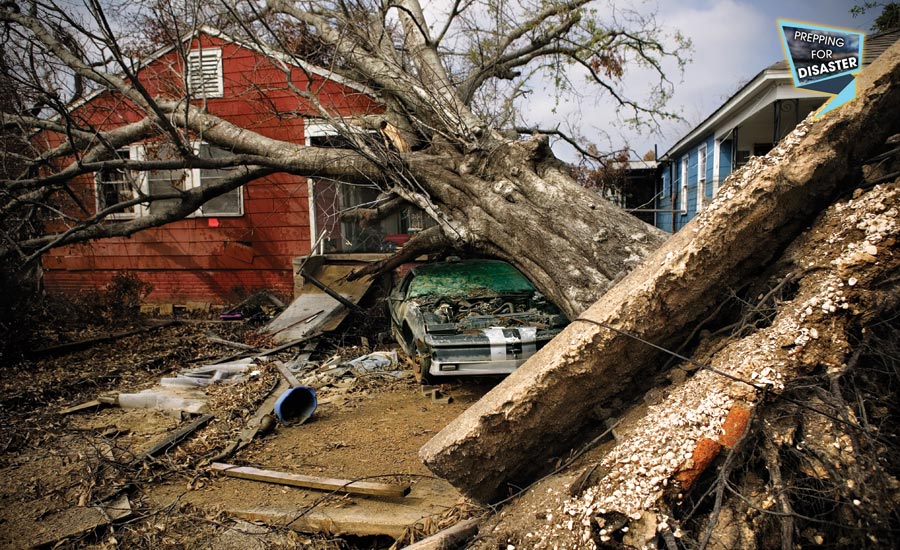 Sometimes you chase, and sometimes the storm comes to you.

When the Storm Comes to You

Katie Smith, and her husband Josh, own and operate PHC Restoration in Raleigh, NC. They are the second-generation owners of this independent, family-run, full-service restoration company that was founded in 1971 by Katie’s father, Carl Sherman. Katie became a Certified Restorer in 2011, and is part of the Restoration Industry Association’s Board of Directors, and chairs the RIA’s Membership and Marketing Committee.

did a lot of damage to her local community, despite being two hours inland from the ocean.

1) What did operations look like ahead of Hurricane Matthew?

If we would have listened to the weather reports, we would have been completely unprepared. Even until the last minute, forecasters were calling for the storm to turn away from North Carolina. We were hit by Matthew on Saturday, Oct. 8. During the week leading up to the 8th, we all had a gut feeling that something was going to happen, so we began prepping our emergency response units to make sure we were stocked and ready to go.

2) What happened when Matthew came through? Were you prepared enough?

When it was all said and done, we received 16 inches of rain and 60 mph wind gusts – and we are more than two hours from the coast! Some reports say that rain was falling at a rate of 7 inches per hour. It was enough to quickly shut down two main interstates. We were responding to a few calls on Saturday and had to stop because of road conditions. Roads were closing and washing away before flash flood warnings were issued. We lost power at 1 p.m. and it was five days before we regained power at home and at work.

I do not think that Josh and I were prepared enough to handle being without power at home AND at work for as long as we were. When schools are closed for a week and you’re two young parents running a disaster restoration business during a hurricane, I don’t think anything can prepare you for the feeling of being pulled in so many directions at one time. Our cell phones were ringing nonstop since our landlines were down. We were grateful for every call we received, but it was overwhelming to try to maintain our normal workload and respond to CAT losses at the same time.

3) How many claims did you take on?

We responded to 65 properties in the first week. At that point, we felt that we were able to pick and choose and prioritize what we would focus on for the rest of the month. The hard part was trying to provide a work/life balance for everyone. Quality of life became a factor when deciding what to take and what to pass on. We weren’t out chasing this storm. It came to us. We still had families at home that needed our time at the end of the day, and that made it easier for us to say “no” to the less desirable claims.

4) How much equipment did you rent?

We rented Sunbelt’s Disaster Response Unit (368 air movers, 112 dehumidifiers) plus three generators to supplement the equipment we owned. For the most part, we had what we needed, but we have great local partners like Sun-Belt USA in Raleigh that keep us well stocked. Relationships with vendors are important all the time, but especially during a disaster.

5) Did you work around the clock?

We averaged about 12 hours per day and we took Sundays off, except for the day after the storm hit. While we had a job to do and customers to take care of, we had to balance that with the understanding that our techs had to take care of their families. They didn’t have power at home and schools/daycares were closed for a week. That’s a lot to deal with. If the quality of life suffers, the quality of work does as well.

6) How did you manage to keep jobs and tasks organized?

Two things were lifesavers for us: Client Runner and our Verizon hot spots! For two days, we ran our office from our kitchen table since we have a standby generator at home that powers a few rooms. Internet service was out for over a week, but we were able to use hot spots to connect to Client Runner from our laptops and we could keep our devices charged from home and our vehicles.

7) What advice would you offer other restorers who might unexpectedly find themselves in the path of a storm?

Trust your gut and know when to say no. Keep the physical and mental well-being of your team a priority. Sure, overtime is nice, but people get burned out and reach the point where time with their family and rest is more important than money.

Social media is a great tool for information when you don’t have television. We relied on our local emergency management Facebook pages for updates on road closures. There were many times that we had to find alternate routes to respond to clients because of the unbelievable amount of sinkholes and washouts.

Communication became an issue for us internally. Our techs were not able to keep their cell phones charged without power at home and without power at the office. We were able to use vehicle chargers, but with an overloaded network and spotty service, batteries died quickly.

In every interview we conduct, we set clear expectations of what happens during a disaster. To ensure that our production staff knows they are expected to report to work, even if they aren’t on call. The general rule is that once we determine our families are ok, it’s time to serve others.

When You are Called to the Storm

Jason learned the “insurance side” of the construction field during Hurricane Ike in 2008. He opened his first Rainbow International franchise location in 2009 in Monroe, Mich., and has purchased several additional territories. Jason’s franchise continues to be one of the largest in the system and as an expert in restoration, he is continually called upon by Rainbow International leadership to help in CAT loss situations, like Hurricane Matthew. He also quickly embraces new technology available to restorers to offer better services to his customers, and increase the efficiency of his team.

When Hurricane Matthew hit, Jason packed up his truck and headed solo to Hilton Head Island, SC, to see how he could help local franchisees in the hardest-hit areas.

1) What made you decide to head toward areas damaged by Hurricane Matthew?

I actually had no intention of going but had a commitment to the corporate that I was part of their large-loss team. They understood that I could not personally bring resources. But I can help franchisees in the affected area, and once they got the ball running, I planned to return home to Michigan. What I expected to be a few days on-site ended up being several weeks. I finally traveled home on Oct. 31.

2) What did you find when you arrived?

The hurricane hit on Oct. 8, and I arrived on the 10th. I quickly got some franchises going on some projects, and the jobs just kept pouring in. While working on a Marriott Hotel near the coast, someone from the PGA golf course across the street approached me saying he had a little water in his basement. That turned into a weeks-long, $1 million damage claim, and completely changed my plans.

3) Talk about the scope of work at this prestigious, luxurious golf course.

There was mold growing in some rooms – including in the carpet, some wind and rain damage in some of the rooms in the inn. Shingles had been ripped off the roof and there were some air bubbles in the roofing system, dirt and debris had washed into the parking garage; there was a lot more work to be done than we initially lead to believe. In all, we ended up doing work in six buildings owned by the golf course – several on-site, and several off-site including a restaurant and bike shop.

Using infrared cameras, we able to look for possible hidden moisture problems in walls and ceilings. We quickly discovered water wicking up through drywall in some areas. Also found a lot of preexisting mold in the club house’s old pro locker room. We quickly worked to contain that and gutted other areas down to the studs.

4) How did you manage the project since you were far from home without your own crews, equipment, and other necessary components to run a job?

I called up some friends in Canada for equipment and “rented” some of their staff for the work as well. This included two of their project managers who ultimately helped run the crews, with me managing the job as a whole. Thanks to another contact in Florida, I was able to have anywhere from 25 to 40 people working the job on a daily basis.

Equipment-wise, we had nearly 50 negative air machines, 35 dehus, large desiccants, forklifts, eight hydroxyls, hundreds of extension cords, generators, you name it. Plus, we had everything we needed from the logistics end thanks to mobile technology. Between my Wi-Fi card, printer, and trailer, everything was there to handle jobs that came our way – including this big one.

When you think about logistics, there will always be things you need, and things you need to order. You have to find the closest companies to you and assess who can get it to you quickly. You can’t nickel and dime on this stuff, you just have to get it there.

We had to stay about an hour away and make the drive every morning. We typically worked 12 hour days; not around the clock.

5) What lessons did you take away from Hurricane Matthew?

CAT work can bankrupt you. I would certainly handle the money differently next time. Initially, we don’t always think about money. We just want to get the job done and do a good job for the client. But in this case, I wish I would have held out for some money upfront instead of going right to work. Months later, there is still an outstanding balance. You have leverage if you don’t go to work until you get a down payment.

4 Reminders for Cleaning Valet during the Start of Every Project

Most people who go on hurricane duty come back with nothing.