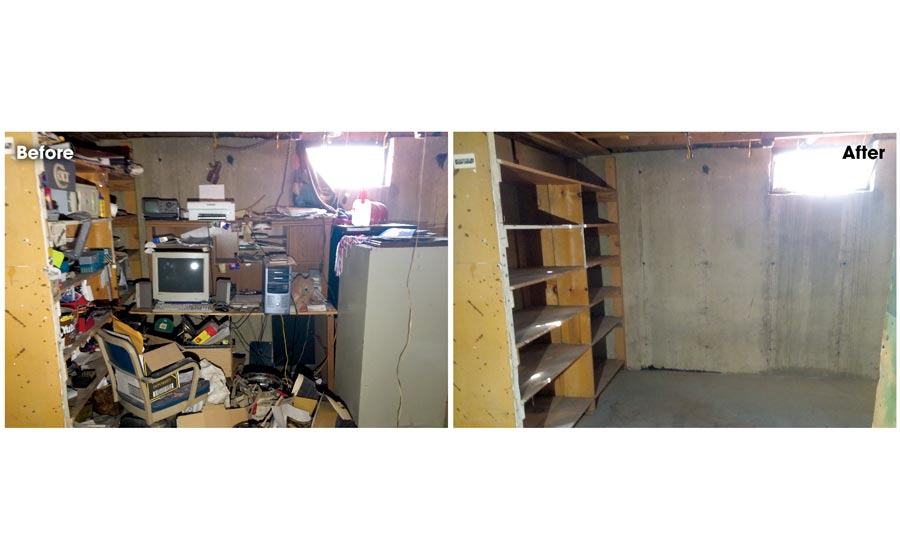 Before shows like A&E’s “Hoarders” and TLC’s “Hoarding: Buried Alive”, hoarding was a relatively unknown mental illness. Reality TV shows the worst-of-the-worst of all hoards with garbage up to the ceiling, unsanitary conditions, and homes about ready to crumble beneath the weight of the contents inside. The hoards have been growing for decades.

How accurate are these shows? Many of you will likely agree to watch a one hour TV show documenting a crew’s attempt to clean out a severe hoard is not an accurate depiction of what truly goes into jobs such as these. Hoards come in all shapes and sizes, involving many different types of items from rare books and antiques, to trash. Most hoards do not involve squalid, unsanitary conditions, but maybe do include some kind of biohazard cleanup. You could find a hoard in a basement, but a completely normal main floor. Likewise, not all hoards have been there or been growing for years.

Aaron and Jen Williams have seen a lot of things since starting their business, All Cleaned Up, in Reno, Nev., in 2012. They initially started as a property maintenance company, but have since worked their way into being skilled, highly – trained biohazard remediators. About 80 percent of the jobs they handle every year involve body decomposition.

Last year, the pair handled a job that combined an unattended death with hoarding.

“The man had passed away in his home unattended, and he had given up on his life. He had not been throwing things away, and there was just a lot of stuff in there. It wasn’t collecting, it was trash,” Jen explained as she laid the groundwork for the job.

The man’s body was in the home nine days before he discovered it. Jen recalls it was pretty warm in the home without A/C, as temperatures ranges from 70 to 80 degrees daily outside. The body had decomposed so badly that some of the body fluids had gone through the floor and down the basement walls. This meant there was a lot of biohazard work done before even thinking about cleaning up the rest of the home.

This is the basic process the Williams’ followed in this instance, and an overview of their normal workflow which is largely based on the RIA’s Forensic Restoration Guidelines:

It’s important to note the necessity of full and proper PPE for jobs like this. The Williams’ served on the subcommittee which crafted the RIA Forensic Guidelines and they don’t take any chances. This means full-face respirators, bloodborne pathogen suits, several layers of gloves, shoe covers, taped-on gloves, and so on. This was necessary for every step of this job.

“The house was dirty. There were moldy dishes and decomposing food on the counter,” Jen recalled. “There was a lot of drug paraphernalia, plus marijuana, cigarette butts, and alcohol bottles. The man was also an avid bullet-maker. We easily found three 50-gallon drums of bullets. It was amazing.”

On top of the filth, Jen and Aaron discover the basement previously flooded while full of items that now growing mold.

The cleanup and mold remediation were somewhat straightforward, but removing contents from the basement prove very difficult because items were packed in so tightly and there was only a narrow stairway leading in and out of the space.

“We had to be pretty creative with the basement. There were no windows and we obviously couldn’t damage the home, and we also tread lightly to be respectful to the family,” Jen said.

Just like many other jobs they handle, the medical examiner recommends All Clean Up to the victim’s daughter who tasked with getting the home cleaned up and ready to sell. In this case, the daughter wanted to be part of the process meaning doing walkthroughs and seeing everything in the home. During the actual cleanup, she mainly stayed outside but did want to sort through items and do inventory. She requires to wear some PPE and did allow the crew to bring all the items of value to one spot and spray them down with disinfectant before she began her sorting.

When it comes to getting biohazard work, having a team that can handle this type of work is critical. All Cleaned Up has a team of five who are all part-time and on-call. They are almost all first responders, who are looking for some extra work.

Aaron and Jen have worked hard to build trust among their team and within their community. They believe in communicating with each other and clients. As they’ve built a reputation for themselves as skilled remediators in the Reno area, they’ve got a lot of referral business from sources like the medical examiner and first responders. The growth hasn’t happened by boisterously bragging about the work they do.

“Don’t try to go too big too fast,” Jen wisely said when asked about her advice to others thinking about getting into biohazard work. “This is a slow, methodical process. That will be the difference between you and the other guys.”