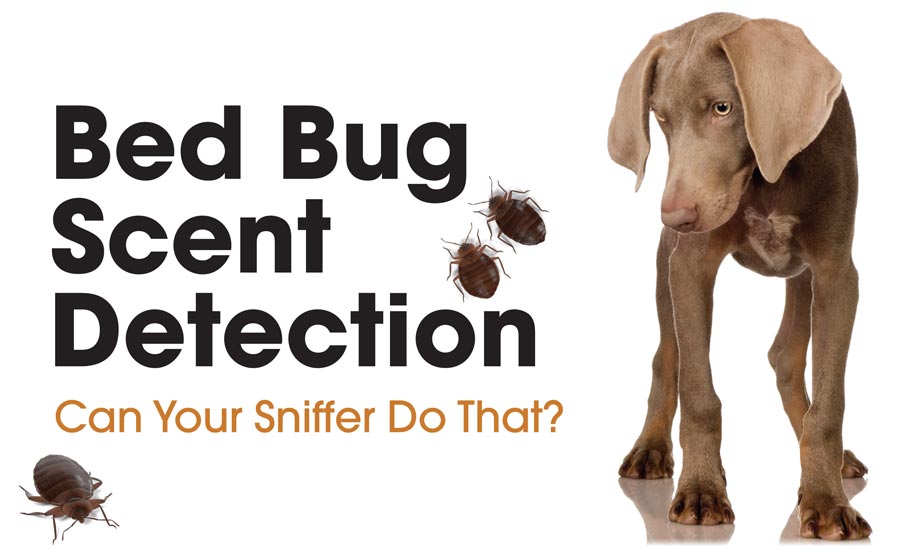 Dogs have been trained throughout history to perform a myriad of services to assist humans in the completion of essential tasks. From hunting to protecting our homes, to search and rescue missions in the rubble of the Twin Towers. Dogs are extremely reliable animals with countless uses. One of the most common uses for a working dog is scent detection. Canine scent detection is used by military and law enforcement for the detection of bombs, arson investigations, and drug searches.

Bed bug canine popularity has continued to grow over the last 10 years with the surging cases of bed bugs. With that surge, requests for bed bug inspections increased significantly. Awareness of the problem increased with high-profile bed bug stories showing up on both national and local news stations about the pests being found in hotels, airplanes, moving trucks, clothing stores, multi-family residential communities, etc. Canines became a very attractive option because they were shown to be significantly more accurate than humans at inspecting for and detecting bed bugs. In addition, a canine inspection team can inspect areas at a much faster rate, saving time and labor for both the inspection company and the client.

Canines have a much larger portion of their brain dedicated to olfaction, with the number of receptors ranging around 220 million, versus humans having approximately six million (Correa, 2016). Researchers have also found that 40 percent of a canine’s brain is dedicated to scent (Marbach Animal Hospital, n.d.). The advanced olfactory system is what allows canines to be trained to detect so many varying smells. Bed bug canines detect certain types of pheromones emitted from the bed bug, namely alarm pheromones with the strongest correlation (Vaidyannathan & Feldlaufer, 2013).

Bed bug canines typically receive advanced training for six to nine months prior to being released for full-time use in the field. Dogs are trained using a reward system approach. There are two popular reward approaches practiced in the training of bed bug canines. One is a play reward, and the other is a food reward. The canine receives a play or food reward based on a positive confirmation of bed bugs.

Once a canine is deemed ready to be used in the field, they are then paired with their assigned handler. Typically, the handler trains with the bed bug canine for a period of one to two weeks. When the team is able to demonstrate successful work, the canine is released to the handler and the team may begin working in the field. Where they may be utilized in a variety of applications. For example, since early detection can greatly help to prevent a localized infestation from spreading to other unaffected areas. Preventative/proactive inspections have become very popular. Particularly in high traffic areas such as hotels, assisted living communities, daycares, and medical facilities.

Bed bug detection teams can swiftly search an entire structure and pinpoint which rooms, if any, contain live infestations. This service can save both home and business owners inordinate amounts of money by only treating the infected rooms instead of the entire structure. Canines can even detect viable bed bug eggs before they hatch. These teams are also are used to rule out or confirm the presence of bed bugs in situations where people suspect they have bed bugs. And by remediation companies who want to confirm their treatment was successful.

The most successful teams continue to train at least twice daily or work daily in real-life situations. Exposing the canine to multiple environments, smells, and situations will ultimately yield a better working team. I have personally worked with seven different canine teams. Several of them during their initial stages, and all of them have had to adapt to the changing environments to increase accuracy.

According to Linda Walters, NESDCA Accredited Owner/Handler of On Point Canines, “the most difficult inspections have overwhelming smells such as cigarette smoke, foul odors, or noise disturbances; all of which are distractors for our canine, Sherlock. As a result, we may opt to reinspect areas to confirm our results”. She also added that she will always attempt to visually confirm the presence of bed bugs in tandem with her inspections.

Companies or handlers that don’t devote their full time and attention to development fail to meet expectations. Therefore, there is a contingent of people who are cynical of bed bug canines because they have experienced false positives/negative detections. On the other hand, there are many organizations that have found reliable teams that produce amazing results. And have saved them thousands of dollars in unnecessary treatments, or catching the early stages of an infestation. In my personal experience, not too many handler/canine teams start out with top-level accuracy. However, the handlers that train often in many different environments. And study the behavior of the canine, end up being the highest performing teams with 95% plus accuracy.

Bed bug canines normally require an investment of $7,000-$15,000 from an accredited academy. There are two academies in the United States that are NESDCA (National Entomology and Scent Detection Association) accredited: IronHeart High-Performance Dogs in Shawnee, Kan., and J&K Canine Academy in High Springs, Fla. Canine inspections typically generate anywhere from $175-$325 dollars per hour in revenue. Some organizations have as many as 20 teams working in the field. Revenue generated from bed bugs continues to skyrocket, with a twenty-fold increase since 2006. With this increase, there is a corresponding increase in demand for bed bug canine inspections.