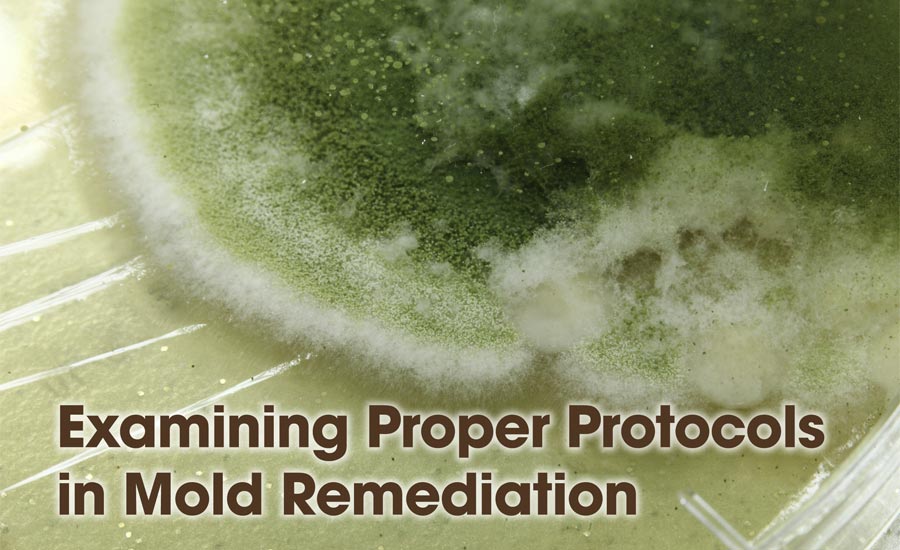 Aside from our industry standards, there is little to no regulation or licensing required to perform mold remediation and inspections in most states. Past and current studies have connected the links between mold exposure and health issues. And demonstrated mycotoxins as possible causes of human diseases in water-damaged buildings (WDB).1 An article titled “Final Burden in Waste Industry: An Occupational Risk to be Solved” by C. Viegas states that airborne fungal contaminants are increasingly gaining importance in view of health hazards. Caused by the spores themselves or by microbial metabolites.

To begin my research on mold remediation and regulation, a six-question survey (seen in figure 1) conducted to ascertain. The importance of sampling for mold both before a remediation project and after the remediation has been completed. The survey helped develop a trend of how the public is or is not protected from this environmental hazard. As it is related to third-party protocols and sampling. A questionnaire developed for remediation firms to assess their beliefs about the industry, sampling, and clearance by an independent third-party. And handed out to remediation companies in both mold-regulated and unregulated states.

The questionnaire process started by choosing two regulated states: Texas and Florida, and comparing the answers of two non-regulated states: North Carolina and South Carolina. A regulated state is one that has passed legislation and developed licenses. Which must obtained prior to performing mold assessments and mold remediation. Non-regulated status is those who have not passed any legislation pertaining to the remediation process. Numerous companies from each state contacted. The companies were randomly chosen by googling mold remediation firms in an area of the state and starting at the top of the page. And choosing every third firm to contact until I reached 10 responses in each state. It took 19 contacts in North Carolina, 20 contacts in South Carolina, 18 contacts in Florida, and 22 contacts in Texas to have 10 firms from each state answer the questionnaire.

There were some disadvantages when surveying the remediation companies. It is not known if the companies that opted out just did not want to answer the questions. Or felt they may not answer the questions correctly which led to their non-participation. Another disadvantage is that the companies that did respond were not checked for accuracy. Although it is believed that they gave honest answers, in theory, they have to give the answers they felt necessary. Without a controlled environment and follow-up, one must consider these possibilities as a weakness in the survey.

IDENTIFYING AND QUANTIFYING THE MOLD ISSUE

This is a topic that draws considerable debate. Should there be sampling to identify and quantify the mold problem or should the issue just be remediated? Throughout my experience and education in the courses taken in East Carolina’s Master’s Program. It has been taught that in safety situations/concerns, there is a three-step process. The first step is to identify and quantify the issue. The second step is to plan and remediate the problem. The third step is to check and make sure the remediation was effective. It has been argued that because there are no standards for mold, “If there is mold, just clean it up.” However, Martinez (2004) states, “The environmental component of an investigation may involve the collection of air samples to detect and quantify the presence of bioaerosols.”

Cabral (2010) states that “The concentration of fungal spores in bioaerosols depends on three important biological factors. (1) The magnitude of sporulation. (2) Atmosphere relative humidity and air currents. And (3) Conidia dimensions and weight.”

Considering those findings, one cannot establish the number of mold spores in the air by visually assessing the suspected fungal problem. Some molds like high temperature and high humidity, while others like lower temperatures and lower humidity; some like airflow, while others prefer less airflow. A person cannot visually look at a mold colony, state what type of mold it is, and tell someone how many spores are in the air. What a person sees will not hurt them, it is what a person does not see that should be a concern regarding mold.

Texas prohibits companies from conducting the mold assessment and then also performing the remediation work. As one remediation company stated during the survey, “Mold is part of our environment. If I do an inspection, I will find a mold.” There is an obvious conflict of interest for the same company to be writing the protocol as well as remediating the work.  It was interesting to see that in North and South Carolina. Which not regulated, only 60 percent felt it necessary to use a third party to write their protocol. Twenty-five percent felt there were occasions in which a third party would be useful. Such as a customer with health problems, legal concerns, and liability. In Texas, again it is the law, a remediation firm must have an independent party write the protocol.

Because of this conflict of interest, many states which are not regulated recommend having a third party write the protocol and do the post clearance. For example, the North Carolina Department of Health and Human Resources advises that. “If you hire a consultant to investigate and identify a problem in a building, that should be all the consultant does. Do not hire a consultant who also provides remediation services. Although most consultants and contractors are honest, some may interpret environmental results (which are often somewhat uncertain) to steer you toward their services.” Using figure 4. One can see that approximately 50 percent of remediation firms in North Carolina use a third party to write their protocols.

The New York City Department of Health and Mental Hygiene (2008) states. “The presence of a trained professional to provide oversight during remediation can also be helpful. To ensure the quality of work and compliance with the work plan. Per the American Industrial Hygiene Association, a trained professional should have, at a minimum, a relevant science or engineering degree. And two years of full-time supervised experience in mold assessment.” Safety must be the primary concern when remediation of mold performed.

Sampling has been criticized because there are no across-the-board regulations. However, from the results of the survey, one can draw the conclusion that remediation firms see a benefit from sampling.

This is not a “revenue” generator for them, as Texas must have an independent third party write their protocols. And the remediation firms felt sampling was beneficial. From the survey, I felt Texas has a grasp on what the proper steps should take to handle mold. The answers from the remediation firms there were more uniform than any of the other states. Cerna (2016) explains that a uniform methodology for monitoring and evaluating airborne fungi must be consistent and repeatable. If all firms in a state are on the same page, there should less misinformation give to the employees and consumers. Martinez (2004) explains that it is important to understand the advantages and disadvantages associated with sampling.

And while Cabral (2010) tells us that fungal source strength data is useful for the assessment of maximum potential fungal load in indoor environments. One should consider the limitations of sampling. Niemeier (2006) states that it is important to be able to identify and quantify mold contamination levels in indoor environments using validated methods. Niemeier’s statement is in line with the teachings of Master’s-level courses taken in the East Carolina University Occupational Safety and Health Program as it related to safety.